Here is the list of campers for the August 2022 camp

Who is eligible for 2022 Oak Bay cross country camp?

To register, complete the forms below and email to Mrs. Tessa Kubicek.  Pay the Camp Fee of $175 using School Cash Online.  Student names will appear on School Cash online once forms have been received. 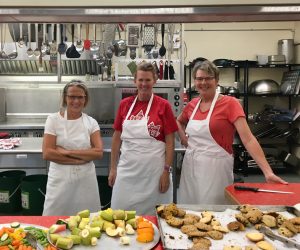 King and Queen of the Bluff All-Time Top 10

King and Queen of the Bluff Results 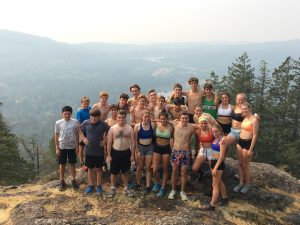 Dance Contest Judging Guidelines (note:  guys, the judges do not want you to dress in female clothing anymore.  Try something different please and you must keep your shirts and pants on). Bonus points for choreography and pre-planned production. In 2022, we are changing up the format slightly.  There will be four dance groups in this competition: Junior Girls, Junior Boys, Senior Girls, and Senior Boys.

Parent help is needed in the kitchen.  Contact Tessa Kubicek if you are able to help.  A one day shift is also appreciated.

Parent help is also needed to assist with running the camp.  Contact Mrs. Tessa Kubicek at tkubicek@sd61.bc.ca if interested.

How to get to Camp Barnard :

We will be in Keego Kitchen in the Kaa and Sona cabin circles.  It is on your right near the parking lot, directly beside the large grass field.

Camp traditions have grown over the years including the development of several unique sport-specific drills, such as bean bag volleyball, assassins, hash harrier runs, inner tube pool polo, coaches’ dumb decathlon, a team dance contest, and many others used by top athletes around the world.

The  Oak Bay Cross Country Camp has had over 550 campers attend.  For a history of past campers click here

By 1992 the camp had grown to 30 participants, too big for the Thetis Cabin, so the camp moved to its new home at Camp Barnard in Sooke, BC. A record 96 participants took part in 2001. The setting at Camp Barnard is ideal for camp activities including swimming, hiking, running games like Colours and Sticks, the annual game of Assassins and of course, running.  Thanks to Carol Bennett, the grand lady of the Oak Bay Cross Country Camp, and parents such as Gayle Hunt, Nola Jackson, “Zuppa” Dave Secco and Trish Neal, the camp has become famous for its meals, thus the “Eating Camp” nickname currently used by many camp participants.

The camp has had over 575 participants over the past 31 years, many of whom returned to camp the following summer because they were “hooked”.    The tradition continued in 2014 despite the difficult strike endured by teachers, parents, and students.  2015 marked the year that the 550th Oak Bay runner attended the camp. 2019 will mark the attendance of the 600th camper.

2018 marked the final year that Mr. Butler led the camp.  He is proud of the legacy the camp has left for the hundreds of Oak Bay runners who have participated. He wishes to thank the dedicated parents who ran the  camp kitchen, his parents for the use of their cabin in the camp’s early years, his wife Sue for her support looking after their three young children and to his children, Liam, Elise and Cara for always supporting the camp, even when they were very young.